The ESD Database of Economic Incentives includes only a fraction of State subsidies to businesses and does not contain crucial basic information: how much individual businesses are getting in total, in what form, and how much the public is spending to create one full-time job.

Our groups have been asking the Governor and Legislature for a “Database of Deals” since 2015. During that time, New York State government has spent an estimated $4.4 billion per year, or around $20 billion in total, on all forms of economic development incentives. (As a yardstick, New York State invests roughly $4 billion annually in rebuilding and maintaining its roads, bridges, rail, and upstate transit.)

After watchdogs wrote to the leadership of New York State’s Empire State Development (ESD) on April 30th to request release of the long-awaited Database of Deals, ESD published its “Database of Economic Incentives” (DOEI) on May 6th. While this is a welcome step, unfortunately, the DOEI fails to answer basic questions like, “How much is that business getting in state subsidies in total?” or “How many full-time jobs has it created?” The DOEI only includes a fraction of recent State economic development subsidies and still leaves the public without a clear picture of where all the dollars go and what the public is getting for its investment. (The DOEI data includes about $852m of ESD subsidies disbursed after January 2018 for still-active projects.) Ideally, the database would include state and local subsidies of all kinds, but the current database instead contains “total public-private investment” without separating out local incentives.

New Yorkers should have access to a Database of Deals that provides transparency and accountability for the dozens of business subsidy programs. This should be a companion to the programs’ own reporting requirements, which often are ignored. In a May 2017 ​audit​, NYS Comptroller DiNapoli found ESD failed to meet ​more than half of the reporting requirements for tax credit and job creation programs, including independent evaluations of the efficacy of economic development programs, general overviews, and program-specific reports.

We previously identified 20 criteria for a complete Database of Deals. The DOEI fails to achieve 12 of these 20 criteria (see table below). The DOEI does include useful elements—the name and location of recipients, size of planned awards, project status, and “jobs” commitments and accomplishments data. The DOEI also is user-friendly, allows easy downloads from the State’s open data site, and provides user orientation materials.

However, the DOEI is far from complete. It includes only data for projects beginning in 2018 and for projects managed directly by ESD, leaving out roughly half of annual NYS economic development spending and all local economic development spending. The DOEI also lacks summaries of the dozens of programs and initiatives through which funds are awarded, and primary source materials such as contracts and agreements made with the recipients. Basic variables such as the actual and planned timing of disbursements and job creation/retention targets for reporting year also are missing.

Critically, the DOEI fails to standardize the definition of a “job.” Absent this, there is no way to determine whether jobs created or retained are permanent or temporary, and full-time or part-time. Furthermore, there is no way to compare programs or evaluate whether they are cost-effective.

A useful “Database of Deals” contains the following (click to enlarge): 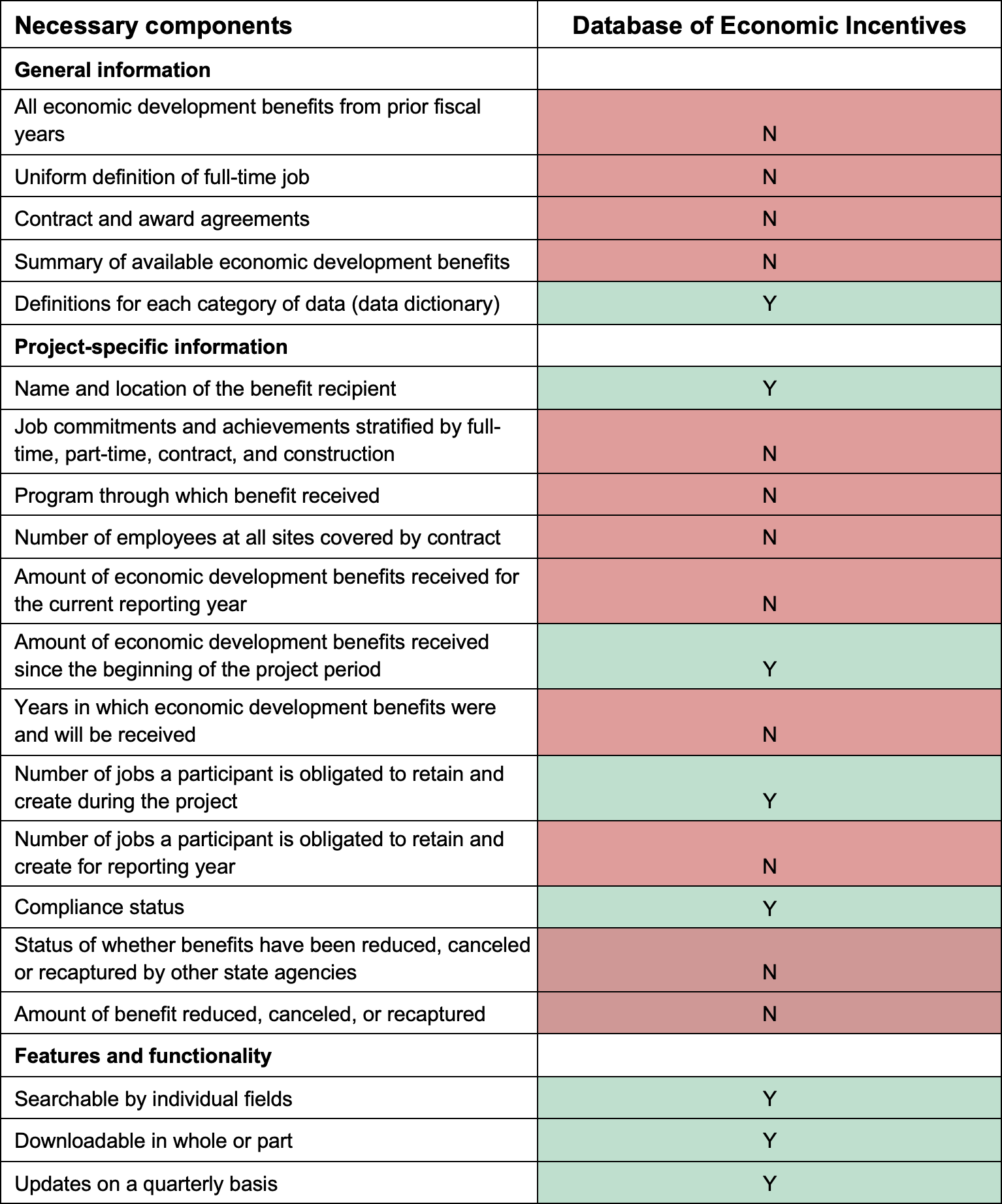